As a student of wine and spirits, I have to put in a fair amount of studying. Luckily the subject matter happens to be pretty popular. Unluckily, it happens to be pretty expensive, too. So in order to get some tasting practice in, have a little help paying for it, get the group together, and teach my friends a thing or two, we threw a little spirits tasting party. Sure, my friends and I could just get together and drink, but why not add a layer of education to it? Learning something can elevate a get-together and give people something to remember (though whether they remember this one, I’m not so sure).

Here’s how to do it:

Rule #1: Make it easy, whatever people are in the mood for.

I didn’t want to force people to learn something they weren’t interested in, nor did I want it to feel like those that did decide to play along were in for a long activity. I set up five bottles of brown spirits (could just have easily been five bottles of wine, or beer, or whatever you’re in to) wrapped in paper and numbered, then created a little sheet with numbers 1 through 5 and the base ingredient of each spirit. People were to taste through the five spirits (with water if desired) and guess which spirit matched which base ingredient.

-Here’s a quick lesson for you: when making spirits/hard liquor, a base ingredient containing sugar (grapes, barley, molasses, etc) is fermented to create alcohol, then the alcohol is distilled down to  a purer level (a fermented wine is approximately 10% alcohol whereas a distilled liquid is usually around 40% alcohol).-

It took all of 10 minutes to taste through the spirits, and after whoever desired to had completed the exercise, I revealed the answers and talked to whomever wanted to listen about why the spirits based on those ingredients were the way they were. 90% of party time was purely that- party time- but for those that wanted to learn something, we had that too.

Rule #2: It’s okay to ask for help but still control the environment.

Unless your friends have lived in caves their entire lives, they’re generally going to offer to chip in when you throw a party. That said, if you’re trying to master a particular theme, just bringing random drinks isn’t necessarily going to help you. In the name of learning, and understanding that you’re creating an experience, people will be happy to give you some cash instead (for this particular party I asked for a $20 donation to the spirits fund). It makes it more fun for everybody to experience something they’re not accustomed to. If you’re going to take this route though, you’d better deliver (see Rules #3 and #4).

Rule #3: Use it as an excuse to amp up the whole affair. 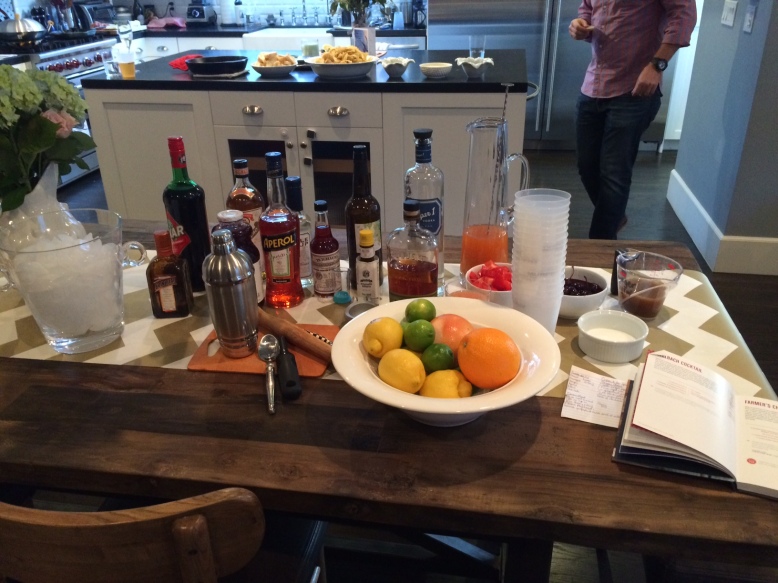 With a full bar of varied quality spirits, it seemed wrong to just provide some coke and club soda and tonic. I used it as an excuse to go full mixologist and create a cocktail bar. People were free to mix what they wanted or use the cocktail book I had handy to step outside their comfort zone. I also had a menu of a few choice cocktails, along with two very helpful co-hosts, so we could make drinks if people weren’t into attempting it themselves. We deemed the Puesta del Sol (below) the most likely to be popular (and one of the most complicated) so I had some pre-mixed in a pitcher.

I will admit it- a spirits tasting party is not hazard-free. Drinking hard liquor straight is no joke. Food is crucial. For snacks I had some chips, dips, and melty cheese to soak up all that booze. For a simple but fun and flexible dinner I had a panini bar and allowed people to build their sandwiches and hand them to me for pressing. No sitting down, no forks and knives, but people ate something and we didn’t have a total mess on our hands.

“Why, Emily, why would I want to stand in the kitchen grilling sandwiches alone and not enjoying time with my guests?” Well, friend, trust me, it’s not like that. People are in the kitchen making their sandwiches and fascinated and delighted by the process. You won’t be alone, I promise.

You just threw an awesome party and taught your friends something new, likely teaching yourself something new in the process. Sit back, have a drink, and enjoy the community you just created. Cheers!